Skip to content
Early this morning, Marvel Studios unexpectedly dropped the first trailer for Black Widow and as well as showing off some downright amazing action sequences, it’s a preview which has also left us with an awful lot to discuss as we look ahead to the first Phase 4 movie.

Set between the events of Captain America: Civil War and Avengers: Infinity War, it also appears as if Black Widow will delve into Natasha Romanoff’s past by exploring the hero’s origin story.

Now, we’ve taken a deep dive into the footage to explore all the different reveals and Easter Eggs, including one which could very well spoil the fate of a key cast member. As if that’s not enough, though, we also have a gallery of must-see GIFs giving you a closer look at those key moments.

So, to check out this Black Widow trailer breakdown, simply hit the “View List” button down below! 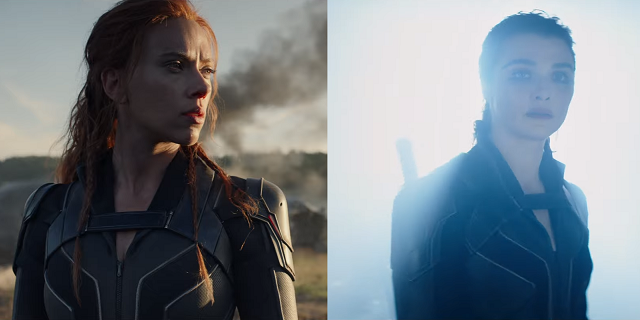 Scarlett Johansson recently claimed that Black Widow isn’t actually an origin story but based on the way the length of the hero’s hair differs from scene to scene in this trailer, something tells us that we will indeed end up exploring her past over the course of this solo adventure.

Look closely at the costume she’s wearing in the scene above and you’ll notice it’s the exact same outfit Rachel Weisz’s Melina has on at one point, a sign perhaps that that’s what the Black Widows wore when they were both working for the Russians. How our Black Widow was recruited by S.H.I.E.L.D. is something fans are desperate to know so it being addressed here is a must.

Plus, there’s further evidence that the movie will take us to a pre-Iron Man MCU…

A Much Younger “Thunderbolt” Ross 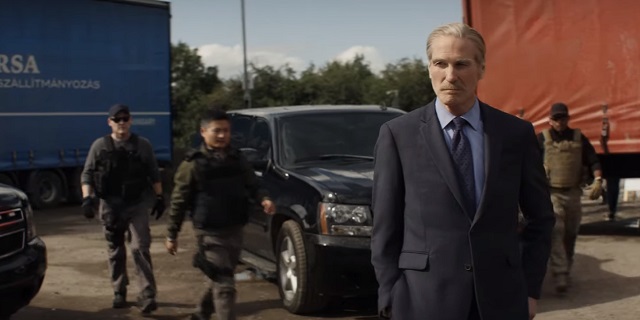 It’s no secret that William Hurt returns as General “Thunderbolt” Ross in Black Widow but looking at him here, CGI has clearly been used to de-age him and he appears to be even younger than when we first met him in The Incredible Hulk.

That could very well mean he played a key role in recruiting Natasha to the side of the angels but Tony Stark told Natasha at the end of Captain America: Civil War that Ross was coming for her, so there’s a strong chance he’ll make his presence felt in the present day as well. He definitely looks younger than he did in that movie, though, so this can’t be 2016.

Will those theories about him recruiting Yelena Belova to the Thunderbolts prove to be correct? Based on what else we’ve spotted n the trailer, that seems somewhat unlikely. 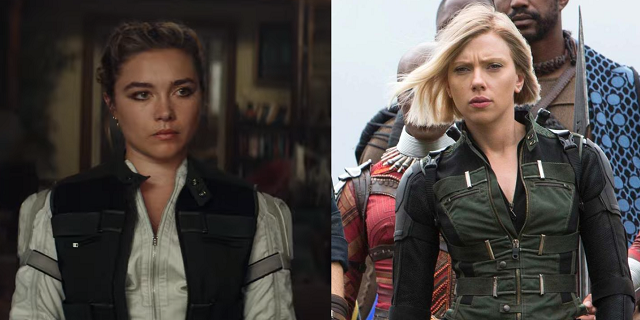 Look closely at the vest Yelena is wearing during the scene above and you’ll notice that it’s exactly what Natasha had on during the events of Avengers: Infinity War. While it’s entirely possible that Black Widow is just inspired by her friend’s fashion choices, we’re not buying that, and it instead seems far more likely that she ends up wearing it as a tribute of sorts.

If so, that probably means Yelena meets her maker at some point here…well, that or Natasha believes that’s the case and the door is open to the character returning down the line.

In the comics, Yelena and Natasha are enemies and it would be a terrible waste on Marvel’s part to have Florence Pugh just make a one-off appearance in the Marvel Cinematic Universe, so perhaps this shared world will end up getting a new, villainous Black Widow as we move into Phase 4? 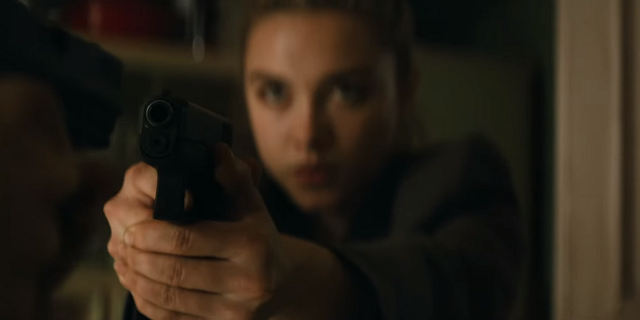 Talking of Yelena, it’s worth noting that when they’re reunited, Natasha refers to her as “sis.” It’s unlikely that they’re literal sisters but there’s obviously a history here the movie will explore.

They’re extremely evenly matched and obviously received the same training, while Melina also appears to be pulling out some similar moves when we later see the trio leaping into action. 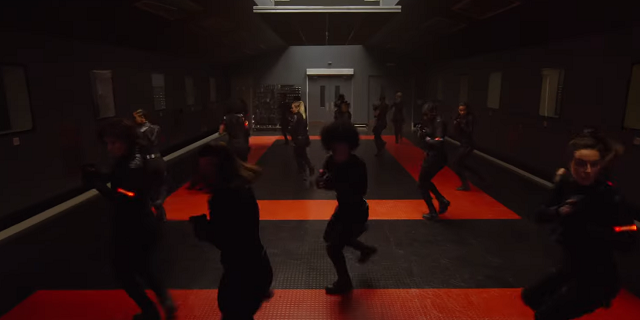 Avengers: Age of Ultron touched on Black Widow’s time in the Red Room and it appears that’s a training programme which is still being used in Russia. It won’t be at all surprising if those trainees are going to come gunning for our heroes but it’s also possible that this is another flashback.

Natasha is clearly hoping to put an end to the Red Room, though, and while it’s not explained whether she goes after them or if it’s the other way around thanks to her actions in Captain America: Civil War (it would be typical of Ross to set them on her in a bid for revenge after she helped Steve Rogers escape), it looks like we’re finally going to delve into this corner of the MCU.

An Unexpected Take On Red Guardian 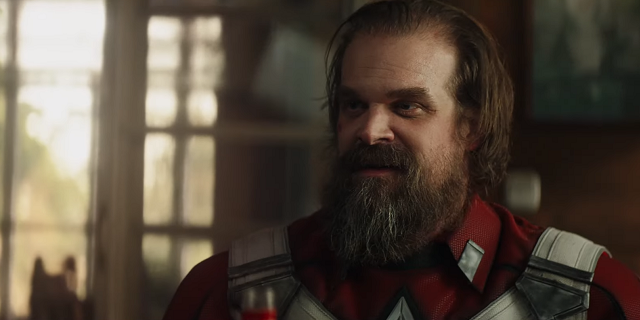 However, by far the biggest surprise is that Red Guardian is actually on Natasha’s side and it seems as if he’ll end up being comic relief! We see him escaping from what looks like a Russian Gulag and during the time he’s spent there, it seems as if poor Aleksei is no longer in fighting shape.

He squeezes into his old suit, though, and it looks like David Harbour is having an absolute blast. It also seems as if he’s still very much a badass SOB and he’ll hopefully have a future in the MCU beyond this movie because he’s someone who could bring a lot to the table moving forward. 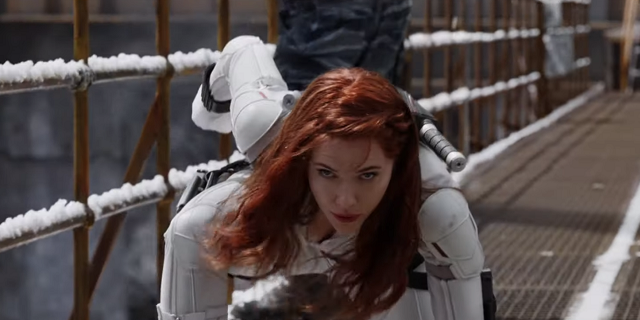 We mentioned Black Widow’s one costume a little earlier in this post and remain convinced that that’s her original Red Room suit she donned shortly before being recruited to S.H.I.E.L.D.

However, it’s not the only new suit she’s going to get in this movie as that awesome looking snowy sequence shows off a white version which is obviously meant to help her blend in.

Some will dismiss this as being a way to help sell more action figures but it’s great to see Natasha’s look shaken up in such a significant way and this likely means new gadgets too! 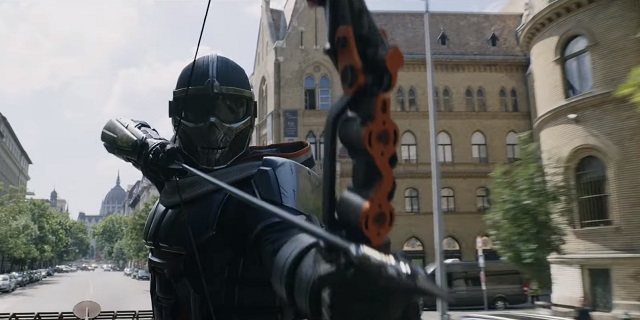 Remember how Ghost ended up looking like a Power Rangers reject in Ant-Man and The Wasp? Alas, it seems Taskmaster can now join her because his suit looks downright abysmal in the trailer.

Many fans will argue that this is just a “prototype” costume or something similar and it is possible he’ll get a new look by the time the movie ends. However, this is the same suit as the one revealed in the concept art and it really doesn’t look any better than what we saw in those set photos.

It’s fair to say that Taskmaster is a hard character to pull off in live-action but it seems Marvel Studios has dropped the ball in a big way here. It is, however, interesting that he’s using a bow and arrow and some have already theorised that this might be Clint Barton in disguise! We doubt it, though… 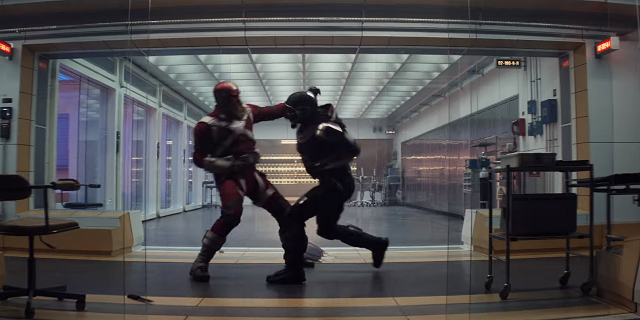 Taskmaster’s identity is a mystery but with no sign of O. T. Fagbenle’s mysterious character here, he remains a top candidate for who could be beneath the villain’s mask.

While he’s initially shown pursuing Black Widow as he drives that tank, a later shot shows what looks set to be a very entertaining fight sequence featuring him and Red Guardian. That’s a fight which promises to be an absolute must-see and it seems like this battle could be from near the end of the film.

The question is, will Red Guardian get to prove himself here or will Taskmaster put him down? 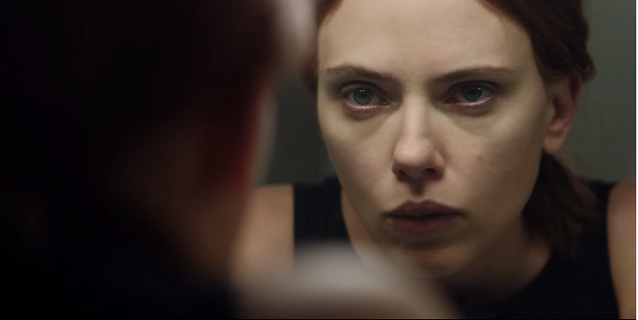 The first trailer for Black Widow is undeniably awesome and the movie definitely looks way better than any of us could have expected. However, the movie fails to address why this adventure is one we need to see, what leads to Natasha heading home, and what, if any, impact this story is going to have on the future of the Marvel Cinematic Universe.

Kicking Phase 4 off with a movie that’s filling in some gaps between the events of Civil War and Infinity War is a strange decision and while it will be fun to see the hero in action, there’s not enough here to really explain why this is a tale worth telling, especially as we already know how her story ends.

With any luck, there will be some big surprises, particularly if rumours about cameos from characters like Hawkeye and The Winter Soldier prove to be correct. An argument could definitely be made, though, that Marvel would have been better off setting the entire thing before the events of Iron Man to address a period in Natasha’s life fans are way more interested in.