Puppet Master is a franchise that has been going for over three decades, with the first entry being released back in 1989. This week Full Moon Features has released the twelfth and newest entry in the franchise with Blade: The Iron Cross.

John Lechago directs the newest film in Charles Band’s popular horror series. To help promote the film’s release, we took the time to chat with John about his latest feature and what it was like to put it together.

We also spoke about what it was like for him to direct creature actor Alan Maxson, who is known for his performance as King Ghidorah in Godzilla: King of the Monsters. Also, we were able to pick the director’s brain about his thoughts on the franchise as a whole as well as his favorite entries in the series.

Check out what Lechago had to say below! 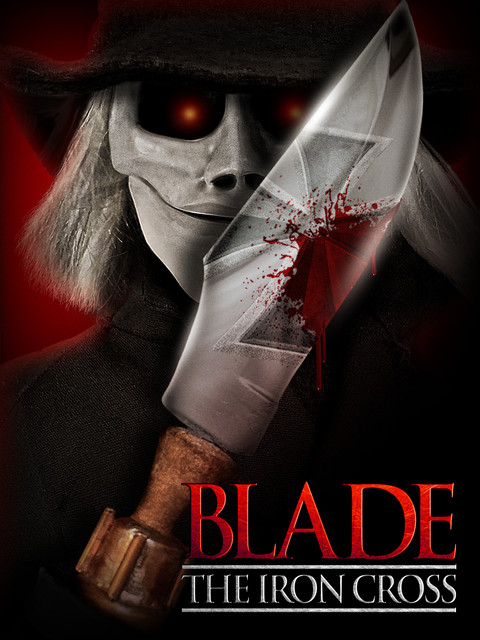 Joe: How did you initially become involved with the Puppet Master franchise?

John Lechago: I initially became involved with the Puppet Master franchise by doing some post-production for Puppet Master: Axis of Evil as I was preparing to direct another film for Full Moon.

Joe: I understand that this is a direct sequel to Axis Termination. Is this also a period piece?

John Lechago: Yes, Blade: The Iron Cross is a direct sequel of Axis Termination. It takes place a few months later, so it is indeed a period piece. We imply that the allies have already acquired the beaches of Normandy, so it is safe to say that the year is still 1944.

Joe: Can you explain how the Nazis factor in this film?

John Lechago: Starting with Puppet Master: Toulon’s Revenge, the Nazis have been the main antagonists in the Puppet Master series. However, this time I chose not to display any overt Nazi symbols and instead show American fascists and sympathizers. I wanted to concentrate on WHY they were the bad guys by highlighting their false sense of superiority and hunger for domination and genocide.

Joe: Do you have a favorite entry in the Puppet Master franchise? If so, can you explain why?

John Lechago: Puppet Master III: Toulon’s Revenge is my favorite. I think it is the first one where the feel and tone of the film crystallized. We got to know Andre Toulon and how he created his puppets as well as seeing the origin of Blade.

Joe: What is the most challenging part of directing a creature actor like Alan Maxson, and how does it differ from directing general acting?

John Lechago: So far, directing a creature actor like Alan Maxson is very easy. Alan and professional creature performers (Jessica Blue and Jarrell Hall also played parts) come very well prepared. They work very hard on their characters and practice their movement, so I have had an enjoyable experience with them.

Joe: Which Puppet Master films should fans watch before checking out Blade: The Iron Cross?

John Lechago: Well, Charles Band and Full Moon would require me to say ‘all of them’! But if you have to cut the list down, I would say; start with Puppet Master III, then go to Axis of Evil, Axis Rising, Axis Termination, and then BLADE: the Iron Cross. They are pretty much direct sequels from Axis of Evil.

Joe: I understand you write, direct, and edit, amongst other jobs, for several films. Which role do you feel most comfortable with, and do you look to anyone in particular for inspiration when working?

John Lechago: I love cinema, and there are so many filmmakers that I admire. I love directing the most because it allows me to collaborate with other talents. The shortlist of directors I try to model includes: Ridley Scott, Sam Raimi, Stuart Gordon, Guillermo del Toro, and Sally Potter. I look to Ridley, Guillermo, and Sally for visual inspiration. I seem to Sam and Stuart for style and pacing. There are so many other filmmakers that inspire me. I better not get carried away.

Joe: Blade can be looked at as a sort of anti-hero rather than a villain. Are there any comic books or characters that you pulled from or used as a basis when bringing him to life?

John Lechago: The Puppet Master series is so extensive now that it has enough depth by itself. I was able to get everything I needed from the other movies. I liked the idea that Blade had the spirit of Dr. Hess, who was initially working on a serum to reanimate dead soldiers for the Nazis and then became a protagonist before being killed. Therefore, I see Blade as having to pay penance for his sins, forever trying to redeem himself.

John Lechago: I want to give credit to a great cast, crew, and production team. The fans that watched the making of the movie know that the principal photography was only five days, so not only was it a great success in merely getting the film done, but we exceeded expectations in every way. Everyone worked very hard and put in a great effort. I am grateful for their contribution.

For decades the fans have been clamoring for it, and now Full Moon delivers with the first standalone feature debut of one of its most beloved (and most frightful) characters; the hook-handed maniac puppet, BLADE!

Charles Band’s Puppet Master series continues as an unspeakable evil from Blade’s past emerges in the form of a murderous Nazi scientist named Dr. Hauser. As Hauser’s heinous crimes are discovered, the psychic war journalist, Elisa Ivanov, awakens Blade, and together the bloody journey of revenge begins. It’s Herr Hauser’s reanimated undead army versus a possessed doll and a beautiful vengeance-seeking clairvoyant!

Who will win, and how will it affect the Full Moon Universe? Find out in Blade: The Iron Cross!

Blade: The Iron Cross is now available with a subscription to https://www.fullmoonfeatures.com/Full Moon Features.