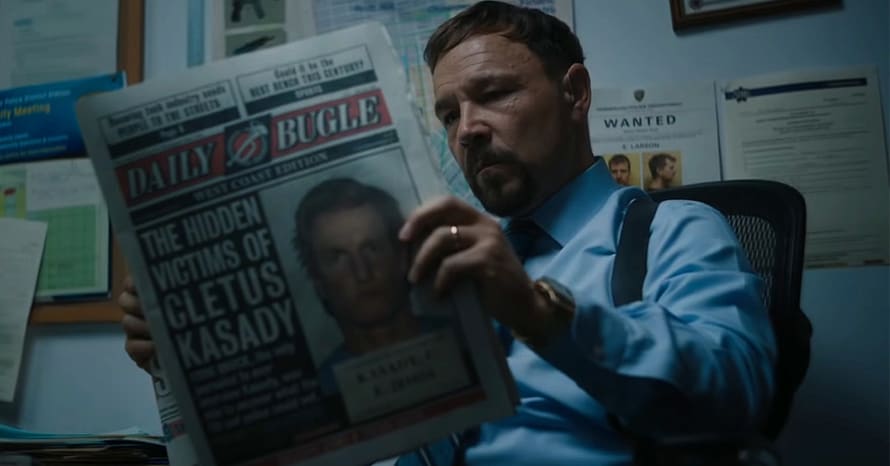 The first trailer for Tom Hardy’s Venom 2 includes a quick look at the host of symbiote Toxin.

Venom: Let There Be Carnage star Tom Hardy and director Andy Serkis blew the internet away yesterday with the debut trailer for the hotly-anticipated Marvel/Sony production. The sequel will see Hardy taking on Woody Harrelson’s Carnage, one of the most iconic Spider-Man villains. The trailer teased plenty of exciting things, including The Daily Bugle and Naomie Harris’ Shriek. What fans may not have caught on to is that the trailer also teased one of the fandom’s favorite symbiotes: Toxin.

While breaking down the trailer with IGN, Venom 2 director Andy Serkis revealed that the cop played by Stephen Graham, who is seen throughout the teaser, is none other than Detective Peter Mulligan. Peter Mulligan is widely known in the comics as the host of Toxin, who is the offspring of Carnage. Graham’s character seems to be an investigative force in the film, snooping around the sightings of Tom Hardy’s Eddie Brock and Woody Harrelson’s Cletus Kassady, so it wouldn’t be surprising to see Graham get attached to a symbiote when both of them are duking it out.

If going by his comic book origins, Toxin joins Venom as a Lethal Protector, so it wouldn’t be surprising both the characters to battle Carnage in the film’s finale. For now, however, we’ll have to speculate just how much Toxin will be seen in the upcoming Tom Hardy film. Who knows, we might even see Stephen Graham transform into Toxin in Venom 2‘s next trailer.

Are you excited to see Tom Hardy in Venom 2? Do you think we’ll see Peter Mulligan become Toxin in the film? Comment below and let us know!

Here is the synopsis for Sony’s first Venom film:

Venom is now available on Digital HD, 4K Ultra HD, Blu-ray, and DVD. Stay tuned for all the latest news regarding Sony’s Venom: Let There Be Carnage, and be sure to subscribe to Heroic Hollywood’s YouTube channel for more content!