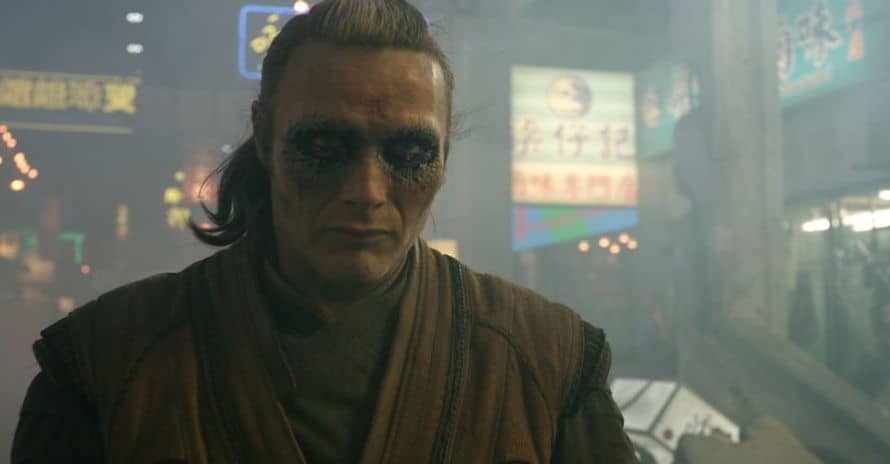 Mads Mikkelson appears to be returning as the villain Kaecilius in Sam Raimi’s Doctor Strange in the Multiverse of Madness.

Doctor Strange in the Multiverse of Madness quietly finished filming without any major casting additions. Either the film is really focused on Doctor Strange, Scarlet Witch, and Baron Mordo, or Marvel Studios has been extra cautious with casting information. However, based on a recent interview, it sounds like Mads Mikkelson’s Kaecilius will also be in the sequel.

In the first Doctor Strange film, Mads Mikkelson’s Kaecilius joined the Dark Dimension after the defeat of Dormammu. No one is ever really gone in the Marvel Cinematic Universe, and a recent IndieWire piece on Mikkelson stated he would appear in Multiverse of Madness:

“This is what life has been like for Mads Mikkelsen since Another Round collected the Best International Feature Film Oscar last month. He started rehearsing James Mangold’s Indiana Jones 5 with Harrison Ford and Phoebe Waller-Bridge, to be followed by a role as Kaecilius in Marvel’s Doctor Strange in the Multiverse of Madness. That will bookend the year he began with yet another franchise villain, Gellert Grindelwald, replacing Johnny Depp in Fantastic Beasts and Where to Find Them 3.”

Over the years, Mads Mikkelson has become a part of the biggest franchises as a villain. While the actor enjoys it and appears to be back as Kaecilius, he is also looking to do more good guy stuff in the future:

“I’m playing misunderstood people. I’ve had a few non-villainous American roles that tend to be the baddies; I did an American film called Arctic. He’s not a villain, so I’m grateful for that. Maybe times will turn a little, and people are watching a little more of the Danish stuff. Maybe they’ll accept a funny accent for an everyday-man character. If that’s not the case, I’m happy with what I’m doing. I’m happy I’ve been invited into some great franchises, like the Bond, Marvel, and Indiana Jones [franchises]. It’s a luxury, so if that’s what’s coming my way, I’ll take it any day. If they do want me to do something else, I’ll give it a shot!”

What do you think Kaecilius’s role in Doctor Strange 2 will be? Who else do you think is in the sequel? Let it fly in the comments section below!

Details on Doctor Strange in the Multiverse of Madness are currently limited, though it is said to feature horror elements. Furthermore, the Disney Plus mini-series WandaVision will also serve as the lead-in to the sequel. Scott Derrickson is still attached to the film as an executive producer, with Sam Raimi set to direct from a script written by Michael Waldron. The sequel will star Benedict Cumberbatch, Benedict Wong, Elizabeth Olsen, Chiwetel Ejiofor, Rachel McAdams, and Xochitl Gomez.

Doctor Strange in the Multiverse of Madness will be released on March 25th, 2022. Stay tuned for all the latest news on Mads Mikkelson’s potential return in the upcoming sequel, and be sure to subscribe to Heroic Hollywood’s YouTube channel for more original video content!