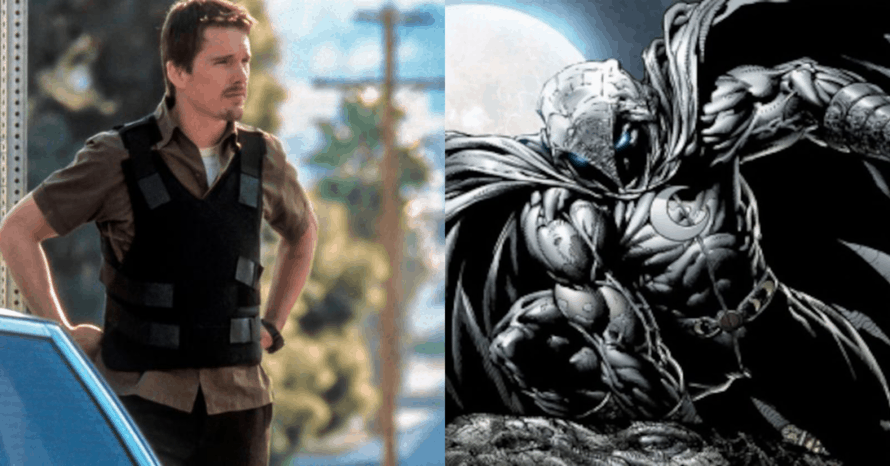 The first set photo from Marvel Studios’ Moon Knight series gives us a look at Ethan Hawke’s character as filming begins in Budapest.

After a cool training video with Oscar Isaac, it appears Moon Knight filming is finally underway in Budapest. So far, the Marvel Studios shows on Disney Plus have covered characters we’ve already seen in the Marvel Cinematic Universe. However, the shows will also be covering new characters like Ms. Marvel, She-Hulk, and Moon Knight. We’ve seen set photos from Ms. Marvel and She-Hulk, now we got our first from Moon Knight with Ethan Hawke.

In Moon Knight, Ethan Hawke will be playing the villain, and a photo from The Budapest Reporter offers our first look at him. Hawke appears to have long hair, a brown outfit, and a walking cane in the photo. Some speculate Hawke is playing Marvel’s Dracula while others are pinning him as Werewolf by Night, Bushman, Count Nefaria, or Sun King. You can take a look at the set photo via Twitter below.

ethan hawke on the set of moon knight everybody screamed everybody said something pic.twitter.com/awGNgvPvMz

Who do you think Ethan Hawke is playing in Moon Knight? Speculate below!

Stay tuned to Heroic Hollywood for the latest news regarding Ethan Hawke’s character in Moon Knight, and subscribe to our YouTube channel for more!