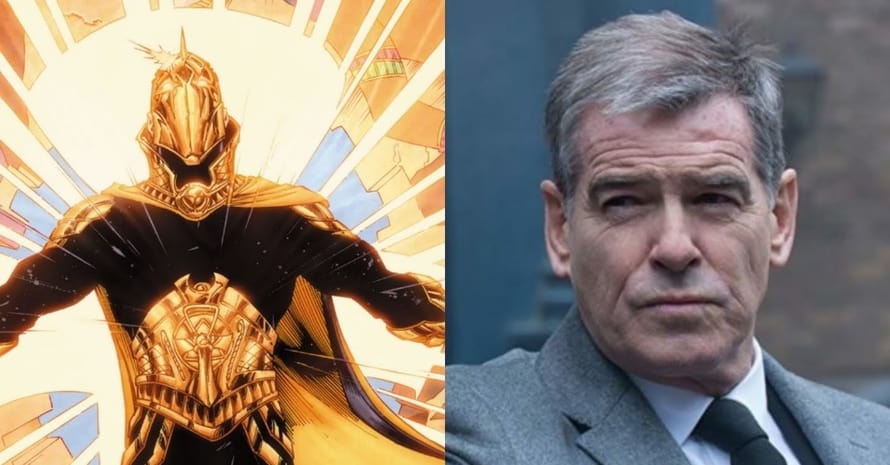 Black Adam is shaping up quite nicely after years of development, with Dwayne Johnson being the only one attached to the project for some time. The DC film is now seeing some serious movement, with principal photography getting underway in three weeks. At DC FanDome, it was confirmed the film will feature the Justice Society with concept art of Doctor Fate shown, and yesterday we learned Pierce Brosnan will be the one to take on the role.

Pierce Brosnan’s Doctor Fate will be joined by other Justice Society members in the film that includes Aldis Hodge as Hawkman, Noah Centineo as Atom Smasher, and Quintessa Swindell as Cyclone. With the excitement for Dwayne Johnson’s Black Adam building, BossLogic and his team created incredible art of Brosnan as Doctor Fate off the heels of the casting announcement. You can take see it for yourself below!

Do you want to see an HBO Max series with Pierce Brosnan’s Doctor Fate and the Justice Society? Comment below!

The details surrounding Dwayne Johnson’s Black Adam are being kept underwraps, but we do know that the film will see the DC anti-hero team-up with the Justice Society. Jaume Collet-Serra is on board to direct with a script from Adam Sztykiel. In addition to Dwayne Johnson in the lead role, the upcoming DC film will star Noah Centineo, Aldis Hodge, Quintessa Swindell, Pierce Brosnan, and Marwan Kenzari.

Black Adam is currently scheduled to hit theaters on December 22, 2021. Stay tuned for all the latest news on Pierce Brosnan’s Doctor Fate in Dwayne Johnson’s Black Adam, the future of the DC Extended Universe, and be sure to subscribe to Heroic Hollywood’s YouTube channel for more original video content.