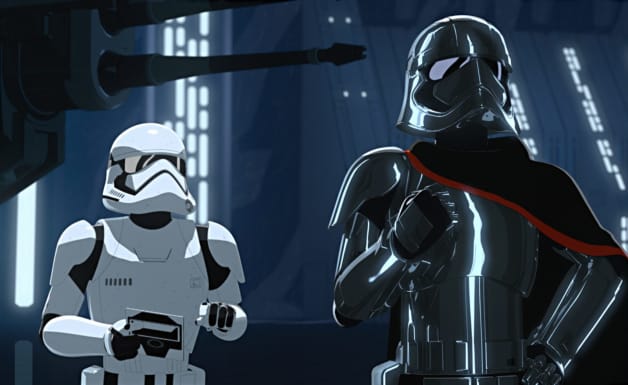 There were a good number of Star Wars fans who brushed off Star Wars Resistance following the debut of the first trailer for Dave Filoni’s latest. From the animation style to the humor which is clearly aimed at younger audiences, there were plenty of complaints about the latest series set in a galaxy far, far away. And don’t get me wrong, I’ve had some minor criticisms of my own. But now that we’re well past halfway through the first season, I can definitely say that you’re missing out as a Star Wars fan if you’re not watching this series. Seriously. It’s great.

Despite a bit of a slow start, the series has really come into its own and is becoming an important piece of the Star Wars universe. Unlike Clone Wars and Rebels, Resistance is very light on the mythical aspect of the universe and focuses exactly on what the title says the series is about. Minus the namedrop of one character, we’ve yet to see the inclusion of anyone wielding a lightsaber, unlike the animated series that came before which focused on both the mythical side and the rebels as well.


This isn’t something entirely unexpected due to the timeline but is one of the series’ strengths as it really allows it to have a singular focus on the Resistance and the rising First Order. When the show was initially announced, I figured that it would connect to The Force Awakens eventually but recent episodes have begun to connect even more than expected and even begun to fill in some gaps that the films have left open. So, if you’re anything like me and are someone who reads the novels or comics to get the whole picture: This is definitely a series for you.

While the animation style might not be for everyone, it’s perfect for this series in particular. I know it isn’t the 3D style that many were used to in The Clone Wars and Rebels but sometimes change can be a good thing. The cel-shading used here allows for a new depth when it comes to X-Wing battles in space, the Stormtroopers pop when on screen and gives the setting a very “clean” look. But why is that last one important? Watching the series, there’s a sense of everything being fine among many of the characters even though it really isn’t. For me at least, the clean look kind of represents that feeling. I know that won’t make sense to everyone but hopefully, if you are watching the series or end up giving it a chance, it’ll become clear at some point. It’s also worth noting that some of the recent episodes of Resistance have also featured some of the best-looking shots in any of Lucasfilm’s animated Star Wars series to date.


As we edge towards the conclusion of the series first season, the direction that Resistance is heading is a very exciting one. The world building has been top notch and really expanded what the universe is like after the fall of The Empire and gives a lot more insight into The First Order and their rise. It’s also looking like the season might conclude around the ending of The Force Awakens which could mean that the already greenlit second season could dive deeper into what the rest of the Resistance was up to during the events of Star Wars: The Last Jedi. It feels like the perfect place for that and definitely something I’d love to see more of. Maybe we’ll even get lucky and see Black Squadron make an appearance? More Snap Wexley is never a bad thing. In the meantime though, if you haven’t been watching Star Wars Resistance, you should cut some time out of your day and give it a shot. I don’t think you’ll be disappointed.

Let us know your thoughts on the above in the comments section below.