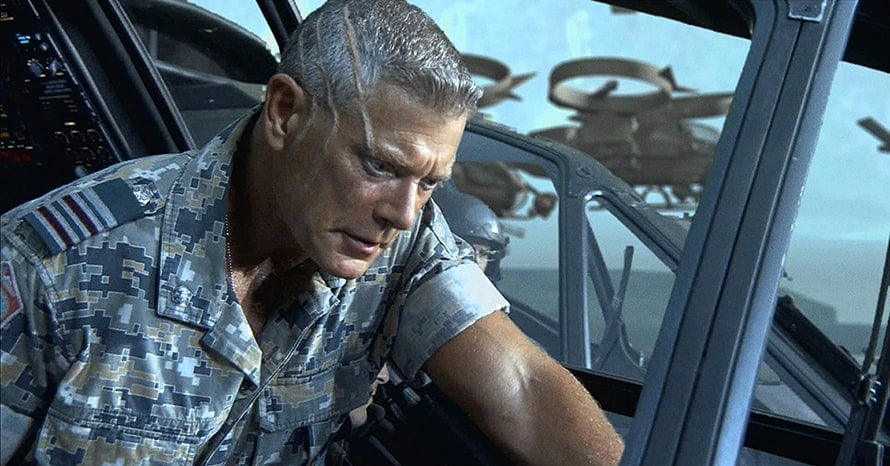 Avatar star Stephen Lang revealed why his character, Colonel Miles Quaritch, is returning for more films in the franchise.

After Avatar‘s monumental success back in 2009, James Cameron quickly laid out his plans for further films following the mythical world of Pandora and the Na’vi after Jake Sully remained in his new blue body. Work is already well underway on Avatar 2, which currently doesn’t have an official title, but Colonel Quaritch actor Stephen Lang confirmed that the villain will make a return in the second film – which is surprising since he was killed at the end of the first film.

When speaking to ComingSoon.net, Stephen Lang explained that James Cameron is fascinated by Quaritch’s character and teased that audiences will see some extreme growth in the villain. It’ll be interesting to see how he returns to Avatar 2 following his death, but recent set photos from the film showed human forces battling something on the planet – so maybe he’s out for revenge. Take a look at Stephen Lang discussing Avatar 2 below.

“I think he’s an incredibly fascinating character and he wouldn’t be back if Jim Cameron wasn’t fascinated in him as well and kind of bent on seeing where he goes. Where does that character lead him as a writer, as a director? And where does it lead me as an actor? And so, I think you can absolutely look for some areas of extreme growth in the character; and then probably areas of regression in the character as well, hopefully, over a period of four more films. Of course, we need him to be very, very interesting, where, by the end you’ve taken a journey, or you’ve witnessed a character go on a life journey that was pretty interesting. You know, that you were glad that you could observe. So that’s what we’re trying to do.”

What do you make of Stephen Lang’s comments about the Avatar sequels? Are you excited to see more from the franchise? Sound-off in the comments below!

Here is the official synopsis for the first Avatar film:

AVATAR takes us to a spectacular world beyond imagination, where a reluctant hero embarks on an epic adventure, ultimately fighting to save the alien world he has learned to call home. James Cameron, the Oscar-winning director of Titanic, first conceived the film 15 years ago, when the means to realize his vision did not exist yet. Now, after four years of production, AVATAR, a live action film with a new generation of special effects, delivers a fully immersive cinematic experience of a new kind, where the revolutionary technology invented to make the film disappears into the emotion of the characters and the sweep of the story.

Avatar 2 is currently set to be released on December 16th of 2022. Stay tuned for all the latest news on Stephen Lang’s role in James Cameron’s upcoming film and be sure to subscribe to Heroic Hollywood’s YouTube channel for more original video content.