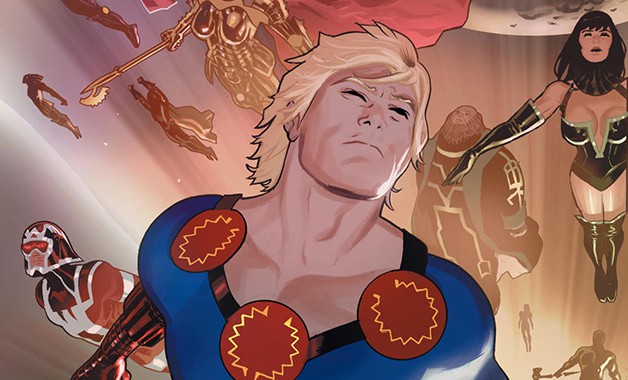 The identity of a key character from the Marvel Cinematic Universe film The Eternals has reportedly been revealed.


The upcoming slate of Marvel Cinematic Universe films has mostly been kept secret from fans to keep the hype focused on Avengers: Endgame. One of the upcoming MCU films is The Eternals and very little information about the Marvel team’s movie has been revealed just yet but fans do know that it’s on the way. As the release date of Avengers: Endgame nears, a new report has possibly revealed the identity of one of the characters who will appear in The Eternals.

The Eternals doesn’t have a set release date but in November of last year, a report claimed to reveal the cast of characters that would be appearing in the film, such as a mystery character named Karen. A new report from MCU Cosmic has seemingly revealed who the character is and it sounds eerily similar to a character from the comics. According to the report, Karen is a normal human from the planet Earth who could possibly be an archeologist as well.


Margo Damian is probably the first name that comes to mind for Marvel fans when reading that description. In The Eternals comic books, Margo Damian was a character who appeared in the first issue of Jack Kirby’s original run. Margo Damian holds significant importance to the team’s origin story because it was her and her father who first discovered the team, thus allowing the events of the cosmic comic book series to unfold.

We’ll be sure to keep you updated on all news regarding Marvel Studios’ The Eternals as soon as more information becomes available. Are you excited to learn that Margo Damian might appear in the film? Who do you think should play the character? Let us know your thoughts in the comments below!